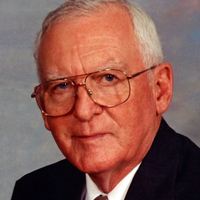 William Eugene James, well known as Gene, passed away on Saturday, September 18, 2021. He was 92 years old. Gene was born in Durant, Oklahoma, to T. W. James and Carrie Anderson James on November 4, 1928.

He entered the United States Army in 1950 and spent 17 months in Korea and Japan before being discharged in 1952. He received several medals of accommodation.

He attended Oklahoma University and graduated from Southeastern College. Gene married Lawanda Estelle Troutman in 1953. They had two sons, Paul James and David James. He worked at Southeastern Packing Co. until moving his family to Shawnee in 1962 where he founded James Sausage Co. He was an active member in the community. Gene was the school board president for 12 years, a member of First Baptist Church, Masonic Lodge, Rotary and Elks clubs. He sat on the board of directors for Pottawatomie County American Red Cross, Shawnee Chamber of Commerce, Federal National Bank, and Oklahoma Baptist University. He sponsored Shawnee high school athletics and supported FFA. He also sponsored the American Legion Baseball team. In 1987, he founded United Optical Inc.

To order memorial trees or send flowers to the family in memory of William "Gene" James, please visit our flower store.