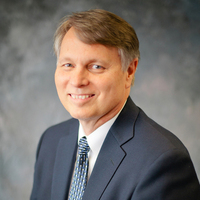 Bob Perry of Shawnee, Oklahoma passed away at the age of 61 on March 13, 2021 in Oklahoma City. William Robert Perry was born January 24, 1960 to Robert and Ann Perry in Ada. Bob graduated from Shawnee High School in 1978, recieved his Bachelor's degree from Oklahoma Christian University, and his Master's from East Central University. Following his undergraduate degree he worked at his family’s furniture store, Perry & McGee Furniture, until 1995. He worked for 26 years at Gordon Cooper Technology. For the last two years, Bob served as the superintendent. He was a talented author and wrote 15 books and 3 plays. His play, The Broken Statue, was performed at the Jewel Box Theatre in Oklahoma City. He married the love of his life, Louise Dickson, on September 11, 1982. They shared 38 years of marriage. He was a very active member of the community serving on many boards and committees in Shawnee and the surrounding areas. He served for many years as a Deacon and Elder at the Central Church of Christ in Shawnee and lived his life to honor God. He enjoyed traveling, going to concerts, movies, playing golf, and playing blanket monster with his three grandsons. He was preceded in death by his father Robert Perry and infant brother Stephen Mark Perry. He is survived by his mother Ann Perry, wife Louise Perry, daughter Lindsey Borcherding of Shawnee and son Jason Perry of Oklahoma City. Son-in-law Matt Borcherding and daughter-in-law Heather Perry. Brothers, David Perry and Scott Perry. Sisters-in-law, Sarah Perry and Tamara Perry. Grandchildren Jacob Borcherding of Shawnee, Jameson and Silas Perry of Oklahoma City. Many nieces, nephews, and extended family. In lieu of flowers please send donations to Gordon Cooper Education Foundation. Gordon Cooper Education Foundation 1 John C Bruton Drive Shawnee, OK 74804 For services: The family requests masks to be worn for the safety of those in attendance. Live streaming will be available for those who do not wish to attend in person. Service will be held at the Shawnee Expo Center on Thursday March 18, 2021 at 10 am. The family will be at the funeral home Wednesday from 3:30-5:30 pm to visit with friends and family.
To order memorial trees or send flowers to the family in memory of William "Bob" Robert Perry, please visit our flower store.