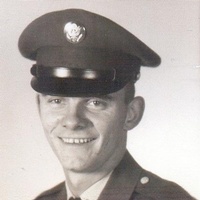 Warren Gene Barnett, 72, of Shawnee, died Wednesday, May 15 in Shawnee. Memorial service will be 10:00 a.m. Monday, May 20 in the chapel of Walker Funeral Service with Rev. Mike Craig officiating. There will be a family gathering following the service at the Shawnee VFW. Warren was born May 13, 1947 in Shawnee to Warren Gene and Ethel (Satterfield) Neal. He graduated with the class of 1965 from Shawnee High School. He proudly served in the US Army from 1965-1968, during the Vietnam War, earning 2 purple hearts and a soldier’s medal. After returning from Vietnam he met the love of his life, Linda Roberts. They married on November 21, 1969 and they have been happily married for the last 49 years. He worked as an aircraft mechanic at Tinker AFB, until his retirement in 2005. Warren was a member of VFW Post 1317, as well as a member of the VFW Rider’s Group and the Disabled Veterans of America. Warren Gene was a proud veteran, doting husband, loved his kids, and cherished all his grandkids and great grands. He loved traveling and riding with his wife, and enjoyed fishing and playing pool. He was preceded in death by his parents, Warren Gene & Ethel Neal. Warren is survived by his wife, Linda BarnettSons: Frosty (Tami) Barnett, and Daryl (Teresa) BarnettDaughter: Regina Barnett Melton8 Grandsons: Alex (Lisa), Matthew (Jenna), Garrett (Cindy), Jonathan, Connor, Aaron, Corbin, Jasper, Eli and Max Barnett4 Granddaughters: Keylie and Harlow Barnett, Michelle Bradford and Amber Jones16 Great Grandchildren4 Sisters: Carol (Leon) Fuller, Dorothy (Don) Bright, Karen Betchan and Jeanne Votaw, as well as a number of Nieces and Nephews.
To order memorial trees or send flowers to the family in memory of Warren Gene Barnett, please visit our flower store.