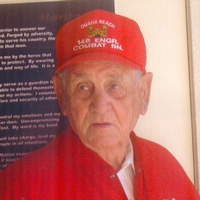 McLoud resident Thomas E. Wilkins, 96, passed away Tuesday, May 7, 2019 in Oklahoma City. The family will be at Walker Funeral Service on Monday from 6 to 7pm to receive friends. Funeral services will be 2:00 P.M. Tuesday, May 14, 2019 at Walker Funeral Service with Randy Moore officiating. Burial will follow at Dale Cemetery. Thomas was born November 20, 1922 in Shawnee, Oklahoma the son of Clarence J. Wilkins and Catherine (Petricek) Wilkins. Thomas served in the United States Army performing many dangerous missions as a member of Boat Team 8 and the 146th Combat Engineers. He received many awards including the Silver Star and Purple Heart. He retired from Tinker Air Force Base in 1980 and enjoyed going to his military reunions, going to the lake, camping, fishing, and working in his yard. He was preceded in death by his parents, a son: Edward Wilkins, a great-granddaughter: Kassidy Wilkins, daughter-in-law: Beverly Lynn Wilkins, and 3 brothers: Clarence., Orval, and Billy Wilkins. Survivors include: 1 Son: Larry Wilkins of McLoud,6 Grandchildren: Kimberly Murry, Catherine Jones and husband Ronald,Shandra Lindley and husband Layne,Edward Wilkins,Russell Wilkins,Andrew Wilkins and wife Sandra,Daughter-in-law: Joyce Ann Wilkins of Shawnee,and several Great grandchildren, Great-Great-Grandchildren,nieces, nephews, other family and friends.
To order memorial trees or send flowers to the family in memory of Thomas Edward Wilkins, please visit our flower store.