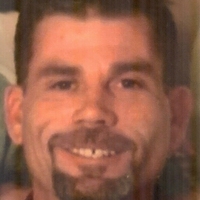 Terry Don Hollis, 52, of Shawnee died Sunday, March 21, 2021 in an Oklahoma City hospital following a year-long battle with cancer. Graveside services will be 3:30 p.m. Saturday, April 24, 2021 in Wetumka Cemetery with Rev. Dr. Tiffany A. Nagel Monroe officiating. Terry was born October 17, 1968 in Holdenville, Oklahoma to Roy L. & Janice C. (LaValley) Hollis. He was a graduate of Shawnee High School, and worked as a private and commercial carpenter and millwright. He was a member of the Millwright Union in Ft. Smith, Arkansas as well as the United Brotherhood of Carpenters & Joiners of America. He was an avid outdoorsman, loving to hunt and fish at every opportunity. Terry was preceded in death by his grandparents, his mother, 3 aunts, 4 uncles and 5 cousins. He is survived by his father, Roy L. Hollis of Shawnee Sister: Lee Ann (Hollis) Rutherford and husband Roger of Shawnee 2 Nephews: Brett Rutherford and his wife Camille of Edmond, and Connor Rutherford of Okla. City Niece: Madison (Rutherford) LeClaire and husband Dakota of Edmond Great Nieces: Stella & Sadie Rutherford of Edmond Several aunts, uncles and cousins, as well as many dear friends, who were also family.
To order memorial trees or send flowers to the family in memory of Terry Don Hollis, please visit our flower store.