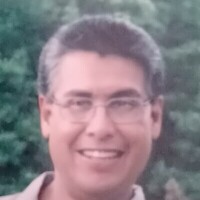 Stephen Paul Thorpe, age 55, was born to Franklin Thorpe, Sr. and Patricia Lorentz on December 4, 1966, in Lawrence, Kansas. Stephen was called home on Thursday, November 24, 2022. Stephen attended Haskell Indian Nations University and worked at the University of Kansas as a maintenance technician.

He was a quiet man but was full of courage and fearless in all things. Personally, Stephen claimed to be a brilliant scientist. As well, he enjoyed playing pool, reading, and spending time with his family and friends. Laughing and having fun were what Stephen loved.

A funeral to celebrate Stephen's life will be held at the Horseshoe Bend Community Center at 2pm on Thursday, December 1, 2022. Following the ceremony, Stephen will be laid to rest at Johnson Cemetery northeast of Shawnee, Oklahoma.

To order memorial trees or send flowers to the family in memory of Stephen Paul Thorpe, please visit our flower store.