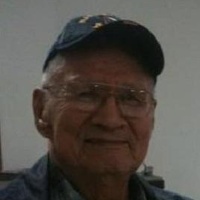 Shawnee resident Stanley Kaskuske, 88, passed away Thursday, July 18, 2019 at his home. Graveside services will be 9:30 A.M. Saturday, July 20, 2019 at the Kaskuske Family Cemetery on West 45th Street in Shawnee. Stanley was born January 2, 1931 in Concho, Oklahoma to Walter and Myra (Wahpesose) Kaskuske. He served in the United States Army in Korea with the 82nd Airborne and the Rangers. He later served in the United States Air Force, totaling 17 years of service. He married Clara Louise (Rolette) in November of 1956. He was a member of the Kickapoo Tribe of Oklahoma where he had served on the Business Committee and enjoyed participating in traditional ceremonies. He also enjoyed working on cars, hand carving, and spending time with his grandchildren and family. He was preceded in death by his parents, his wife, 1 son: Michael Kaskuske, a grandson: Douglas Makaseah, and a son-in-law: Robert Brown. Survivors include 1 Daughter: Elaine Brown of Shawnee,2 Grandchildren: Danielle Voyles and husband David of Shawnee,Anita Bryce of Meeker,Great-Grandchildren: Emily and Shayla Bryce of Meeker,Devin Voyles of Shawnee,2 Sisters: Rebecca Nickell of Shawnee,Sue Johnson of Shawnee,And numerous nieces, nephews, cousins, other family members and friends.
To order memorial trees or send flowers to the family in memory of Stanley Lyle Kaskuske, please visit our flower store.