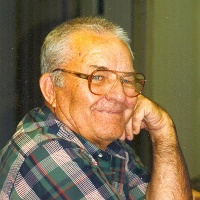 Robert Harris Rooker, 95, of McLoud, OK went to be with his Lord on July 25, 2019.Bob was born April 4, 1924 in McLoud, OK to Fred and Pearl Rooker. He graduated from McLoud High School in 1941. He served in the United States Army as a gunner in 20th Tank Battalion from 1943-1946 during World War II. He graduated from Oklahoma A&M in 1949 with a business degree. He was a member of Theta Chi Fraternity, the American Legion & the McLoud First United Methodist Church. He was a farmer and rancher in the McLoud/Dale area and did income taxes for friends/family in the community until his retirement. He married Betty Miller in McLoud on February 9, 1964. They made their home in McLoud on the family homestead. They had 3 daughters, Anita, Nancy & Susan. He was proud of each of his girls and their accomplishments. Anita married Tim Hardesty and gave him two wonderful grandsons, Trevor & Forrest. He was proud of them & their military service. He is preceded in death by his wife, Betty Miller Rooker, on February 19, 2019. He is survived by his three daughters & son-in-law; Anita & Tim Hardesty of McLoud, Nancy Rooker & Susan Rooker of Oklahoma City; grandsons; Trevor and wife Christina Hardesty of McLoud & Forrest Hardesty of McLoud. Brothers and Sisters in law; Paul & Pauline Rooker of Stillwater & Howard & Peggy Rooker of McLoud; sister & brother-in-law; Betty & Byron Behring of Enid. Numerous nieces, nephews & cousins. There will be a family viewing on Sunday, July 28th from 4-6 p.m. at Walker Funeral Service. Graveside services will be 10:00 a.m. Monday, July 29th at Dale Cemetery.
To order memorial trees or send flowers to the family in memory of Robert Harris Rooker, please visit our flower store.