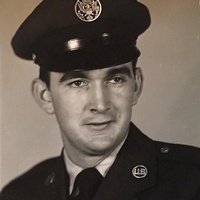 Raymond A. Kelly, 87, of Shawnee, OK died Monday, August 13, 2018 in Tecumseh, Oklahoma.Services will be 10:00 a.m. Friday, August 17, 2018 at Walker Funeral Service Chapelwith burial following in Tecumseh Cemetery under the direction of Walker Funeral Service. The family will be at the funeral home Thursday evening from 5-7:00 p.m. to visit with friends and family. Raymond was born May 24, 1931 in Shawnee, Oklahoma to Dee Miles & Nettie (Moon) Kelly, he graduated from high school in Phillips, TX, and Frank Phillips JUCO in Borger, TX. He served in the United States Air Force and was an aircraft mechanic with Tinker Air Force Base.In 1953, he married Lois Simon in Sacramento. He later married Reba Dell Bateman in 1968, in Stinnett, TX and they were married until her death in 2001. In 2003, he married Patsy Morrel Churchwell in Shawnee.Raymond enjoyed hunting & fishing, leatherwork, giving his grandkids tractor rides, gardening, and working on cars…he was never idle. He was an active member of the Shawnee Masonic Lodge and the Sheriff’s Reserve. Raymond was always proud of his Oklahoma roots as both of his grandparents came to Indian Territory in covered wagons. He lived most of his life in Pottowatomie County and called it his home. Some of his fondest memories were of his early school days in Macomb and Eagle schools where he made lifelong “buddies” he hunted and fished with throughout his life. He was a quiet humanitarian always helping others in need. One of his greatest gifts was bringing joy to others with tales of his times in the military or his hunting and fishing stories. He was gifted in working with his hands and a critical thinker. He was known for his skills in fine leatherwork, gardening, sewing, engine work and skill at fixing almost anything. His greatest gift to us all was is unconditional love and support. His children and grandchildren were proud to call him Daddy and Papaw. In addition, Raymond had a special group of boys he coached along with his sons for a number of years. Many of them say he took a rag tag group of boys and in a few years had a team that won a state championship and nobody wanted them to show up at tournaments so somebody else could win. He was preceded in death by his parents, his wife, a sister, Ruby DeShields, 2 grandchildren, Troy Laster and Tracy Laster, 2 sons, Jerry Laster and Johnny Laster, and 2 brothers, Dee Roy Kelly and James W. Kelly Raymond is survived by his wife: Patsy KellyDaughters: Ruby & Farley Redfield, Cindy Kelly, Louise Franks, and Velena & Wayne Rodriquez Son: Jimmy KellyDaughter-in-Law: Anna LasterGrandchildren: Melissa & Kevin Folsom and their children Kody, Trevor and Logan; Sarah & Cacy Wood and their children Daisy and Buck Weston; Dr. Lacey & Chad Hays; Amanda Hammer and her children Danielle and Kelly; Angie & Tony Aguilar and their children Diego, Dominic and Dante; Glenna & Zoy Gunter; Jeannene & Rob Woods and their children Shayla and her son Sawyer, Misty & Lindsey Moss and their children Ty & Jay, Jacklen & Jared Prater and their children Sydny, Harley, Beckett and Finnley, and Ryan; Jeff Franks; Jamie & Lynn Jones and their children Dyllan and Tyler; Aaron Laster & Mika Hicklin and their children Kelsey, Nolan, Kacee, and Zayden; Clinton & Angie Strudgeon and their daughter Harley; Garrett Strudgeon & Tosha Browning; Kelsey Laster, Rian & Colton Wyers; and Cambry Laster. Danna Blasingame and her children CJ and Heather.
To order memorial trees or send flowers to the family in memory of Raymond A. Kelly, please visit our flower store.