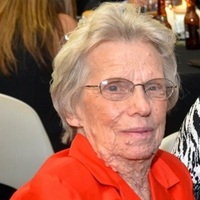 Patsy Sue (Grider) Welch, 78, of Shawnee, passed away early Monday, March 9, 2020 at her home. She was born on July 9, 1941 in Weleetka, OK to WC and Nora (Payne) Grider. Pat graduated from Wetumka High School in 1960 and continued her education later at Gordon Cooper Vo-Tech where she obtained her LPN certificate in 1976. She started her career as an aide at the Wetumka Hospital then onto Mission Hill Hospital before finishing a long nursing career at Tecumseh Sunset Nursing Home. Pat was a long time member of University Baptist Church. Pat’s hobbies included sewing, making baby blankets, and going to sporting events. During retirement you could find her following behind her grandson and nephew to all of their events and sport activities. Pat is preceded in death by parents: WC Grider and Nora (Payne) Grider and brother and sister-in-law Rex and Mikela (Adams) Grider. Pat is survived by her husband of 57 years, Luther E Welch of Shawnee, OK, one son and daughter in law Larry (Dana) Welch of Tecumseh, OK, two daughters Becky and Shelly Welch of Shawnee, OK, two brothers Wayne (Chris) Grider and Jerry Grider of Shawnee, OK, and one sister and nephew, Mona (John Ryan) Grider of Shawnee, OK. Pat had one grandson and one granddaughter, Dustin and Brooklyn. She also had two nieces and eight nephews, and 10 great nieces and nephews. A memorial service will be held in the chapel of Walker Funeral Service, Shawnee, OK on Wednesday, March 18th, 2020 at 2 pm.
To order memorial trees or send flowers to the family in memory of Patsy Sue Welch, please visit our flower store.