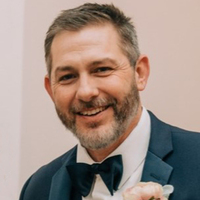 Micheal JonDaniel Lester, resident of Meeker, passed away on Wednesday, October 6, 2021. He was 44 years old.

Mike was born on June 21, 1977 in Shawnee, Oklahoma to his parents, Mark Lester and LaDanna Cox. Mike worked at CPN/Firelake Grocery Store for 18 years and was known as "The Man" who could get anything done. He also enjoyed being an official for middle school and high school football. As an avid OU football fan, Mike and his friends and family loved cheering on their team at OU games. He enjoyed country music, going to concerts, and spending time with his children and grandchildren. Mike loved being outdoors whether it was golfing, going to the lake, or relaxing at the beach.

On March 27, 2021, Mike married the love of his life, Crystal VanCuren. He was a devoted husband, father, grandfather, and friend to many.

Mike was preceded in death by his paternal and maternal grandparents.

A funeral ceremony for Mike will be held on Wednesday, October 13, 2021 at 10:00 am at Immanuel Baptist Church in Shawnee. Following the ceremony, Mike will be laid to rest at Garden Grove Cemetery. Casketbearers will be: Larry Sellers, Tyler Maxwell, Jason Welliver, Kevin Nichols, Michael Tucker and Clint Parker. Honorary Casketbearers will be: Darrell Wilborn and Greg Wilson.

Those wishing to say good bye to Mike may do so at Walker Funeral & Cremation Service on Tuesday, October 12th from 8am-6pm with family available to greet friends from 4-6pm.

Mike was outgoing, kind, full of life, and a genuine man of his word. His smile would light up any room he entered. He will be deeply missed by all of those lucky enough to have known him.

To order memorial trees or send flowers to the family in memory of Mike JonDaniel Lester, please visit our flower store.