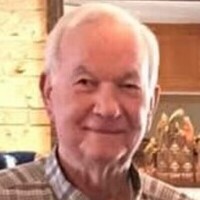 Michael E. "Gene" Kolker of Shawnee, OK, passed away on July 8, 2021, at the age of 80. He was born to his parents, Frank and Mary Agnes Kolker on February 10, 1941 in Elgin, OK. He graduated from Elgin High School and then from the University of Oklahoma with a degree in engineering physics. He retired from Southwestern Bell Telephone after 30 years in November 2000.

He was preceded in death by his parents and his sister, Patricia Brady and his brother, Raymond Kolker.

In lieu of flowers, memorial donations may be made to the Gary Sinise Foundation: https://donate.garysinisefoundation.org/fundraiser/3333575

To order memorial trees or send flowers to the family in memory of Michael "Gene" Eugene Kolker, please visit our flower store.