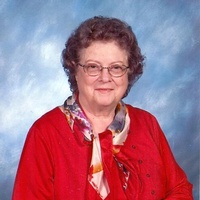 Mary Margaret Crooks went to be with her Lord and Savior on November 11, 2018 at Shawnee, Oklahoma, at the age of 88. She was born July 25, 1930 at Emmett, KS and was first born of eight children of Reuben A. and Bernice A. (Wax) Butts. At the age of five her family moved to Logan OK in the Panhandle and lived at different addresses and attended various schools. Her freshman year of High School was at Laverne, OK. The family then moved to Bengal OK (Eastern OK), and on the way stopped and ate lunch at a Cafe on N. Kickapoo in Shawnee, never dreaming that later Shawnee would be her home off and on for so many years. She lived at Cedarville, AR for a while and moved to Shawnee in 1947. Mary graduated from Shawnee High School in 1948. She was employed at Kress and Woolworth and then worked over 10 years for the Credit Bureau of Shawnee. On February 19th, 1967 she married Myler G. (Mike) Crooks and moved to Smyrna, TN where Mike was stationed in the Air Force. A month before their first Wedding Anniversary he was transferred to Taiwan and Mary came back to Shawnee and worked at the Credit Bureau in Oklahoma City. He came home in January a year later, and they moved to Topeka, KS, after adopting a darling baby that they named Holly, who has brought them so much happiness. The family later resided in Tulsa, OK and Richmond, VA and returned to Shawnee in 1974, and has lived here ever since. Mary worked for the Federal National Bank (now BancFirst) and then for Southwest Title (now First American Title), as a home loan closer for over 16 years, retiring in January 1996. She then worked part time for five years in the Food Service for the Shawnee schools. As a young girl Mary accepted Jesus as her Lord and Savior of her life. She had a passion for Missions and supported many groups all of her adult life. She always taught Sunday school, until the later years of her life. She liked people and found great joy in cooking and entertaining others. She attended Living Love Christian Center with her husband. They worked at various churches in the Senior Adults and loved it very much. She counted so many as friends, loved to play board games and fellowship. Mary dearly loved her family and especially her grandchildren, Carson & Ashley Cathey. Mary was proceeded in death by her husband, Myler, her parents, three brothers, Johnny, Clinton and Jim Butts, sister, Alma Butts Levin, niece, April Meneely, sister-in-law, Mary Ann Butts, brother-in-law, Jack Dean, father and mother-in-law, Myler and Ella Crooks, and other extended family and friends. Surviving Mary are daughter, Holly and husband Tim Cathey of McAlester, OK, grandchildren, Carson and Ashley Cathey, sister, Verna Dean of Shawnee OK, sister, Rosa Meneely of Shawnee OK, brother Bill Butts of Luther OK, and many nieces and nephews, along with many friends, special Caregivers, and Heartland Hospice of Shawnee. Funeral Services will be November 16, 2018 at 1:00pm at Living Love Christian Center, 1000 N. Kennedy Shawnee, OK, with Pastor Mark Guinn officiating. Burial will follow at Resthaven Cemetery with Walker Funeral Service in charge of arrangements. In lieu of flowers, the family requests memorial gifts be given to Living Love Christian Center for mission projects.
To order memorial trees or send flowers to the family in memory of Mary Margaret Crooks, please visit our flower store.