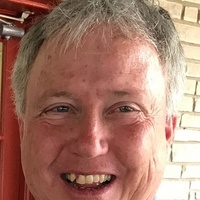 Mark James Betterton was born in Spearfish, South Dakota, on June 26, 1961. He went home to be with his Heavenly Father on the evening of November 7, 2020 after a prolonged battle with COVID-19 at the age of 59. Mark grew up in Guymon, Oklahoma where met his future wife, Karla Bennett at a young age while attending junior high school. Only a few years later after working the concession stand together at a basketball game, the two started dating. They were married by the age of 19. Mark would tell you himself that he married “waaaaay” out of his league. Mark and Karla celebrated their 39th anniversary last May. Mark graduated from Oklahoma Baptist University in 1983 and went on to receive his masters in education from the University of Central Oklahoma. Mark and Karla made a life in Shawnee, raising a family, attending Immanuel Baptist Church, and working in the community for the last 39 years. Mark was an art teacher for the students of Shawnee Public Schools for 30 years, earning Teacher of the Year at Sequoyah Elementary in 2008-2009 (he was very proud of that). During his tenure with Shawnee schools, Mark coached both track and football. He served as an assistant coach for the 2003 Wolves football state championship and played a key role in the 2005 track and field state championship. During his tenure as both head and assistant track coach at Shawnee, he coached 21 individuals to state titles in both running and field events. During his life Mark also had the pleasure of serving as a track coach at the collegiate level as an assistant for Oklahoma Baptist University and head coach for St. Gregory’s. Mark has often been described as a big presence that fills up a room. His smile and his laugh were mere fragments to the pillar of passion and intention which he was in his profession, community, church, and most importantly his family. He was a person who had the ability to impact lives in ways that went far beyond his fingertips, by being passionately involved as a teacher, a coach, a deacon, and member of the Shawnee Public School Board. Perhaps his most unquestionable attributes were his ability to stand for a cause and his persistence toward excellence, not only for himself, but also for others. When Mark fought, he fought hard, with intelligence and intention. He knew what he wanted and more importantly he knew what was right; fighting and persisting in whatever situation to achieve his objective. Not only was this his aim in social and community causes, more importantly he fought for people. Mark’s ultimate goal for those around him was to bring them to their highest potential, whether that be mentally, physically, spiritually, or creatively. His roles as a teacher and coach fostered the perfect environment for his strongest gifts. While Mark enjoyed teaching and coaching at Shawnee, the most important thing to him was his family. Mark was full of an unshakeable faith and his family reaped the benefits of that foundation; always attending church to learn more about the God their dad loved and trusted. They witnessed miracles in the life of his wife Karla and granddaughter, Michelle and Mark was not surprised by either phenomenon. Mark’s favorite pastime was “anything with the grands.” His love for them was abundant. It overflowed and oozed from him at every opportunity to “show them off” to anyone, anywhere. They were his sidekicks and they explored the world with their Papa with wonder and curiosity. He looked forward to grandkid trips in the RV and taking them to do things like white water rafting and skydiving when they grew older. Mark was preceded in death by his father, Ernest Betterton. He is survived by his wife Karla Betterton; his mother Jeanette Betterton; his son Adam Betterton and his wife, Kirsten and grandsons Morrow and Louis; his daughter Jill Bussey and her husband Draye and granddaughters Michelle and soon to be born Ava; his brothers Dennis, Bruce, Mike, and Clifford; his sisters Linda and Connie; along with many nephews and nieces and extended family. In lieu of flowers, the family is requesting donations be made to The Children’s Center Rehabilitation Hospital of Bethany, OK (https://www.miracleshappenhere.org/ways-to-give/donate/) or the scholarship fund of Camp Eagle in Rocksprings, TX (https://campeagle.org/donate/). In order to reduce the risk of spreading COVID-19, the family will hold a private service. The ceremony may be viewed at 2:00 pm on Thursday, November 12, at www.ibcshawnee.org.
To order memorial trees or send flowers to the family in memory of Mark James Betterton, please visit our flower store.