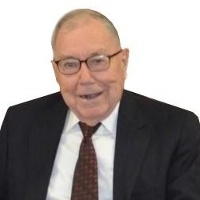 Leon Harold Rogers said goodbye, after 94 years of life filled with service for others. Leon was the husband to the late Leona Grace and father to four children; Celia Card, Harold (Lee Ann) Rogers, Mignon (Mike) Bolay and Randall (Gloria) Rogers. He was the oldest of five siblings. “Poppi” was the name he loved most from his nine grandchildren and 13 great-grandchildren.Leon dedicated his life to his family, community and country. He worked tirelessly for the poor, middle class and rich yet never expected a dime or trophy. Before 18 years of age, Leon was called to the service while being enrolled at Oklahoma A&M. A few years later he returned to Stillwater, OK to marry his wife of 72 years and graduate. As a WWII solider, Leon fought for freedom and patriotism. He chose, after numerous years of executive leadership employment, with local and then the State Chamber of Commerce, to settle into community driven work. His decision to transition into this role was one he was most proud of because it was for his family. Leon retired after more than 30 years of public service, with Community Action. Leon didn’t rest after retirement. He remained active through board service with St. Gregory’s University and the Pottawattamie County election board. He was instrumental in helping with Oklahoma Baptist University’s Raley Chapel and the development of Shawnee’s Economic Development Committee. Leon was a long-standing active Rotarian in Shawnee, OK. The legacy of service Leon leaves in the community of Shawnee is simply remarkable. Above all, Leon always put his family first. He took great pride in watching his children and grandchildren grow while offering words of wisdom along the way. You could always rely on ‘Dad and Poppi’ to be on the sidelines or decorating something, in the front yard, to show his support. He provided an untouchable example of commitment to his family. He leaves behind grandchildren; Angela Card (Ibrahim) Guled, Amanda (Kevin) Knott, Eston Rogers, Macay (Zac) Brummal, Mason (Elise) Bolay, Logan Rogers (Jessica Badsky), Sam Rogers (Savannah Stacy), Madison (Jordan) Bolay and Quinton Rogers. They will miss their Poppi dearly; along with great-grandchildren, nieces, nephews and numerous family and friends. Ed Holmes is more than a friend to our family. He became Leon’s roommate shortly after Leona’s passing. He filled the days and nights for Leon providing a listening ear and helpful hand until the end. Ed and so many others were like family to Leon and we’re forever grateful. To honor Leon, in lieu of flowers, the family requests memorial donations for St. Paul’s United Methodist Church or Rotary Club of Shawnee Foundation Grant Program.  The family will gather at Walker Funeral Service from 5-7 pm on Wednesday to visit with friends.Services will be held on Aug. 15 at 10 a.m. at St. Paul United Methodist Church, 301 N Beard Ave. Shawnee, OK 74801. Burial will follow at Resthaven Memorial Park, under the direction of Walker Funeral Service.
To order memorial trees or send flowers to the family in memory of Leon H Rogers, please visit our flower store.