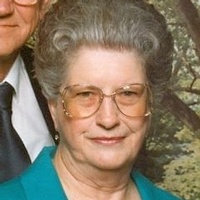 Joyce Imogene (O'Neal) Hampton, 83, of Shawnee died Sunday in Oklahoma City. She was born May 12, 1935, in Geyer, Oklahoma, the daughter of Joseph Martin and Ruby Ellen (Lewis) O'Neal. Joyce attended Shawnee High School, worked briefly as a rural route carrier for the U.S. Postal Service, and was a devoted homemaker for many years. Later in life, she found great joy and purpose in volunteering, alongside her husband, at the Senior Center in Shawnee. On July 14, 1952, she married her high school sweetheart Gordon Howard Hampton in Shawnee, Oklahoma. Joyce enjoyed traveling with her husband to USPS conventions and to visit family all over the U.S. She was an avid genealogy hobbyist, establishing relationships with many distant relatives throughout the years, and passing down a rich family history to her descendants. She was preceded in death by her parents; her husband of fifty years, Gordon Howard Hampton; a son, James Hampton; one brother, James O'Neal; and one sister, Leona (O'Neal) McLaughlin. Survivors include a daughter and son-in-law, Deborah and Bobby Dotson of Shawnee; grandchildren, Cameron and Tara (Dotson) Merritt and Kyle Dotson of Shawnee, and Troy and Tracy (Dotson) Knight of Pennsylvania; great-grandchildren, Chloe, Phoebe, and Aubrey Merritt of Shawnee, and David, Killian, and Owen Knight of Pennsylvania; one sister, Betty (O'Neal) Seaton of Oklahoma City; one brother-in-law, Vernon McLaughlin of Shawnee; one sister-in-law, Barbara (Rhines) O'Neal of Wyoming, numerous nieces, nephews and other family members. Visitation will be held on Friday, March 15 from 6-8 p.m. at Walker Funeral Service. A graveside service will be held 10:00 a.m. Saturday, March 16 at Resthaven Memorial Park with the Rev. Tom Dahlman officiating. Arrangements are under the direction of Walker Funeral Service
To order memorial trees or send flowers to the family in memory of Joyce Imogene Hampton, please visit our flower store.