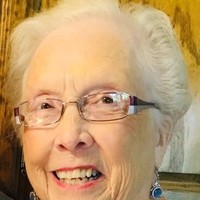 Jo Ann Burnett, 88 was born in New Orleans, Louisiana, on July 29, 1931, to David and Della Wallace and entered her heavenly home on March 1, 2020. Five days after birth she moved with her parents to DeQuincy, Louisiana, where she attended grade school and high school, graduating in 1948. After graduating from High School, she attended Louisiana Business College in Lake Charles, Louisiana. After Business School she returned to DeQuincy to take a job as Clerk in the city hall. While working in the City Hall, she met and married James Bennett in February, 1950. To this union was born two daughters, Debbie and James Leonard of White Hall, Arkansas and Jeannie and Chris Stephens of Pasadena, Texas. She was preceded in death by her parents, two older brothers, James Wallace and Leland Wallace, and one older sister Imogene Wallace, her first husband, and one step son, John Walter Burnett of Meeker, OK. In 1996 she renewed acquaintances with her High School sweetheart, Rev. Bobby Burnett of Oklahoma, and they were married on August 3, 1996. She moved to Meeker, Oklahoma, where Rev. Burnett lived while working for the Baptist General Convention of Oklahoma. She became involved in church ministries along with her husband. She joined Mission Service Corps and attended Missionary Orientation in Texas. She was also a member of Campers On Mission and worked on several mission projects. She served three years in Poncha Springs, Colorado with her husband as Church Planter Missionaries for the North American Mission Board (NAMB) of the Southern Baptist Convention. Upon returning to Oklahoma she and her husband lived on Lake Texoma and continued to serve in Mission Service Corps. She joined her husband in becoming NAMB endorsed Chaplains serving in Disaster Relief up to the time of her passing. In 2007, she and her husband moved to Shawnee, Oklahoma, and joined Immanuel Baptist Church. She is survived by her husband, Bobby Burnett, two daughters and their families, plus step daughters, Janice and Mickey Maynard of Shawnee, Jeannie and Kurt Jackson of Oklahoma City, step sons, Bobby O. and Rebecca Burnett of Gordonville, Texas, Ben and Jennifer Burnett of Cheraw, South Carolina, David and Jo Ann Burnett of Oklahoma City. In their combined family, she is survived by 20 grandchildren and 24 great grandchildren. She is also survived by many friends in Louisiana, Colorado and Oklahoma. A celebration of life ceremony will be held at Immanuel Baptist Church, Shawnee at 10:00 am on Wednesday, March 4. 2020. Officiating will be Dr. Todd Fisher, Rev. Kurt Jackson and Rev. Jason Hinson. Burial will follow in New Hope Cemetery, Meeker. Visitation will be at Walker Funeral Home on Tuesday, March 3, 2020, from 5:00 pm to 8:00 pm. She loved her combined family. Especially the great grandchildren.
To order memorial trees or send flowers to the family in memory of Jo Ann "Wallace" Burnett, please visit our flower store.