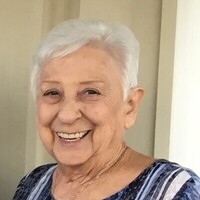 Jessie Faye Compton, resident of Shawnee, passed away on Wednesday, March 23, 2022. She was 82 years old. A funeral ceremony for Jessie will be held on Tuesday, March 29, 2022, at 2:00 pm at Liberty Baptist Church. Following the ceremony, she will be laid to rest at New Salem Cemetery in Jacktown. Family will be present during a time of visitation at Walker Funeral & Cremation Service on Monday, March 28th from 5-7pm. Casketbearers will be: Ryan Maxey, Carson Bontrager, Greg McQuerry, Nathan McQuerry, Fred Smith, and Richard Smith. Jessie was born on August 14, 1939 in Oklahoma City to her parents, Joseph H. Smith and Emma M. Smith. She attended Meeker schools and was part of the class of 1957. On October 31, 1970, Jessie married Bert Compton, Jr. and enjoyed over 50 years of marriage. Jessie worked as a dental hygienist most of her life. After retirement, Jessie and Bert moved to Florida where she learned to play golf and enjoyed the sunshine. The couple moved back to Shawnee in 1998 to be closer to family. Jessie came out of retirement and joined her stepdaughter, Paula, on a new adventure in 2006: Coney Island hotdog restaurant in downtown Shawnee. Jessie worked there until her second retirement in 2019. Outside of work, Jessie enjoyed fishing (even when it was raining), quail dinners with her family, and accompanying Bert to the Shriner’s events. Faith was an important part of Jessie’s life and was a member of Liberty Baptist Church. Jessie was preceded in death by her parents, two brothers, and three sisters. Survivors include her husband, Bert Compton, Jr. of Shawnee, stepdaughter, Paula Maxey and husband, Dick of Bixby, OK, her grandchildren that she adored, Jackie Bontrager and husband Carson of Broken Arrow and Ryan Maxey and wife Meghan of Broken Arrow, great-grandchildren, Olivia Bontrager, Jude Bontrager, Aaron Maxey, and Sam Maxey, sister, Carol McQuerry of Meeker, brother, Jack Smith of Meeker, special niece and nephew, Nathan McQuerry and Kaitlyn McQuerry of Shawnee, as well as numerous nieces and nephews. Memorial donations may be made in Jessie's honor to Liberty Baptist Church, 711 E. Federal Street, Shawnee, OK 74804
To order memorial trees or send flowers to the family in memory of Jessie Faye Compton, please visit our flower store.