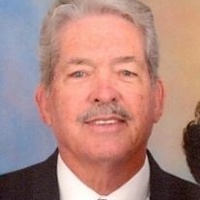 Jesse F. Partridge, age 82 of Shawnee, died Saturday, May 25, 2019 in an Oklahoma City hospital. Graveside services will be 2:00 p.m. Saturday, June 1, 2019 at Resthaven Memorial Park with Paul Calmes and Justin Dunn officiating. Visitation will be at Walker Funeral Service on Friday, May 31, 2019 from 6:00 pm to 8:00 pm. Jesse was born December 17, 1936 in Stroud, Oklahoma to Cecil & Juanita Partridge. He was a graduated of Agra High School and Oklahoma Baptist University, and served in the US Navy. Jesse worked as a clerk in the appliance department at Sears in Shawnee a few years, and later became a civilian employee at Tinker Air Force Base as a program manager. He retired in 1995 after 27 years. He later served 4 years as a golf coach at OBU. On July 15, 1988 he married Norma Robertson Partridge. He was a former Lions Club member, and member of the Elks Club and the University Baptist Church in Shawnee. Jesse was an avid golfer, winning 1st place in several regional and local golf tournaments over the years. He was a skilled woodworker and built many things in the home, as well as for friends. He served in this capacity on various Christian mission projects, nationally and internationally. Jesse loved his heavenly Father, and was a student of the Bible. He served as Sunday school teacher and deacon, and on various committees through the years while a member at University Baptist Church and First Baptist Church of Shawnee. He was preceded in death by his parents and seven brothers and sisters. Jesse is survived by his loving wife of 30 years, Norma Partridge Three Daughters from his marriage to Betty Carter: Lori Partridge, Lisa Mankowich (Pete), and Darla Orr (John) Five Grandchildren and Ten Great Grandchildren Sister: Dorothy Buser Brothers: Kenneth Partridge, Virgil Partridge and Boyd Partridge The family has designated Mission Shawnee, Community Renewal of Shawnee, Family Promise of Shawnee, or your favorite non-profit as appropriate for memorials.
To order memorial trees or send flowers to the family in memory of Jesse F. Partridge, please visit our flower store.