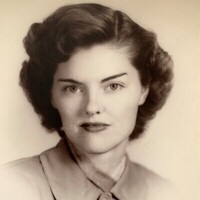 Janette was born on October 13, 1926 in Bernice, Louisiana to James F. and Ruby (Patterson) McCall. She was raised in the Bernice area and then attended Louisiana Tech where she received a Bachelors in Home Economics. After college, Janette moved to west Texas to teach Home Economics. It was there she met her husband, Don R. Swadley They were married in 1951 in Denton, TX, and made their home in Arlington, TX where they lived for many years while Janette taught elementary school, eventually retiring from the Arlington School District. They later moved to Denton, TX and then in 2014, following Don's passing in 2007, Janette moved to Shawnee. Family was always the most important element of Janette's life. She adored her children and was devoted to the care of her special needs daughter, Jane, adding years and memories to the lives of both through Janette's supportive care. Janette and her sister spoke daily in addition to maintaining close relationships with many of her cousins, nieces and nephews.

A memorial ceremony to gratefully celebrate Janette's life will be held at 10:30 a.m. Friday, July 30, 2021 at Emmanuel Episcopal Church, 501 North Broadway, Shawnee, OK 74801. Janette will be laid to rest privately next to her husband and daughter at the Dundee Cemetery in Dundee, TX.

Cremation arrangements are under the direction of Walker Funeral & Cremation Service.

To order memorial trees or send flowers to the family in memory of Janette M. Swadley, please visit our flower store.