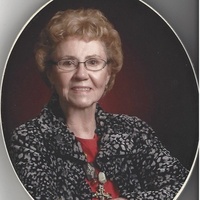 Tecumseh resident, Maxine Jones, 93, died Thursday, September 16, at her home.  She was born February 13, 1928, in Keota, Oklahoma, to Sherman and Freda Wright Hall.

Maxine was a member of the Broadway United Methodist Church of Tecumseh where she enjoyed teaching Sunday School.

After graduating from San Jose City College with a degree in English in 1977, she returned to teach.  She  earned a Masters Degree from Oklahoma University in American Indian Art.  She taught English and Art at Tecumseh High School as well as St. Gregory’s College.

She was a member of the Eastern Star, American Legion Women’s Auxiliary and Pioneer Library Board.

She and Leo traveled the world while he served as a Naval officer.  She enjoyed living in Hawaii and South Africa.  They moved to Tecumseh in 1971.   After retirement they enjoyed many years at their lake house on Eufaula.  Maxine was very creative, even when she no longer formally taught art, Maxine was still an incredibly creative and artistic person.  A trip with her to any art festival would be a lesson in art appreciation.

She was preceded in death by her parents, husband, brothers Tommie and Bud, sister Joan and her greatly loved dog Sugar.

Services will be held at Resthaven Veterans Memorial at a later date.  In lieu of flowers, donations to the Broadway United Methodist Church, Tecumseh, OK, are requested.

To order memorial trees or send flowers to the family in memory of Enid Maxine Jones, please visit our flower store.