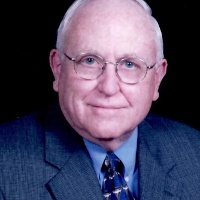 Dr. Donald Gray Wester, 88, of Shawnee, died Friday, May 31, 2019 at his home. A memorial service will be held Wednesday, June 5, 2019 at 2:00 PM at the First Baptist Church in Shawnee, with Dr. Mack Roark, Dr. Bobby Kelly and Dr Charles Kimball officiating. Don was born March 30, 1931 in Petersburg, Texas to Jack and Rosanell (Gray) Wester. As a senior in high school, he won first place in the state of Texas, Extemporaneous Speaking, in 1947. He graduated with the Dickens High School class of 1947, in Dickens, Texas, as Valedictorian. He then went to Baylor University, where he received his bachelor’s degree in 1952. On June 5, 1953, Don married Janie Martin at the First Baptist Church of Bryan, Texas. Don continued his education, receiving his Master of Divinity from Southwestern Baptist Theological Seminary in 1957, his Master of Arts in 1969 from the University of Oklahoma, and finally he received his PhD from the University of Oklahoma in 1979. Don spent several years as a preacher. During that time he served at Ford City Baptist Church; Edge Baptist Church; Adamsville Baptist Church all in Texas; Martha Baptist Church,, First Southern Baptist Church in Rush Springs,, Harvard Avenue Baptist Church, Tulsa,, and First Baptist Church, Tecumseh, all in Oklahoma. Don retired from Oklahoma Baptist University, where he served on the faculty as a professor of Philosophy. As a professor at OBU, Don received the Sears Foundation Teaching Excellence and Campus Leadership Award in 1990 and the Meritorious Service Award at graduation in 2001. The Shawnee News-Star Obituary Form Don was a member of the Highlands Institute for American Religious and Philosophical Thought, The William James Society, and The Hume Society, to name a few. He and Janie were long time members of the Shawnee, First Baptist Church. Don and Janie enjoyed traveling, with many trips worldwide. Before retirement, many of these were connected to academic conferences. He also represented OBU at teaching missions to Budapest, Hungary and Urumqi, China. After retirement they continued to travel with trips to Mexico, Peru, Russia, Egypt, Jordan, and cruises on the Elbe, Danube and Rhine Rivers. Don was preceded in death by his parents and brothers, James Patrick Wester and Michael Oran Wester. He is survived by his wife, Janie Wester; sons, Donald Wester Jr. and his wife Cathy of Conway, Arkansas, James Wester of Midwest City, Oklahoma, Mike Wester and his wife Doyleen, of Shawnee, Tom Wester of Oklahoma City; 10 grandchildren and 15 great grandchildren; two sisters-in-law, Nell Wester of Ozona, Texas and Fran Wester of League, Texas; and many nieces and nephews. In lieu of flowers, contributions may be made in his memory to the Oklahoma Baptist University General Scholarship Fund or to the charity of your choice.
To order memorial trees or send flowers to the family in memory of Dr. Donald Gray Wester, please visit our flower store.