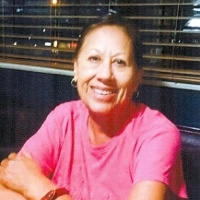 Delores "Granny" Carter, age 69 of Shawnee left to be with our Lord Saturday, June 22nd surrounded by family. She was born in Pawnee, Oklahoma to James Samuel Carter and Rosa Lee Carter (Brady). Delores grew up on Moccasin Trail Road and was the eldest of 10 brothers and sisters. She attended Meeker Public Schools graduating in 1968. She attended Haskell University and later OBU where she was the fast-pitcher for their softball team at the age of 36. She worked for the Indian Health Service for 32 years and after retiring she was employed at the Sac & Fox Nation. Delores loved playing ball and was a highly recognized fast-pitcher. She played with the First-Americans All Indian softball teams and got to travel all over. She won the National Indian Fast-Pitch tournament in Canada along with many others. She loved spending time with family and meeting new people. Also, loved camping, fishing, and cooking outside at Illinois River in Tahlequah, Oklahoma. She served the Lord at numerous church locations including Sallateeska Baptist Church, Earlsboro Indian Baptist Church, and Cold Springs Church in Konawa, OK., and Preach Unto Them Jesus in OKC. She is preceded in death by her father James Samuel Carter, brother, Andrew carter, and sister, Lela Carter She is survived by her mother Rosa Lee Carter, two daughters, Rose "Toogie" Staley and husband Scott Staley, Terre Boyiddle-Blanchard and husband Nicholas Blanchard, two sons, Duane Hocker, and Darrick Walker. Grandchildren: Stormie, Grace, Ulias, Samual, Amelia, Adina, Stephen, Christopher, Isabella, Milana, and 10 great-grandchildren. Sisters and Brothers: Maxine, Lois, Letha, Frank, Thomas, and Larry Wake service will be Tuesday, June 25th 7:00 p.m. Burial service is Wednesday, June 26th, 10:00 a.m. @ Sallateeska Baptist Church 45703 Garrett's Lake Road Shawnee, Ok. 74804 Burial will follow after service at Wakolee Cemetery And lunch will be provided after burial. She would want everyone to come EAT!
To order memorial trees or send flowers to the family in memory of Delores "Granny" Carter, please visit our flower store.