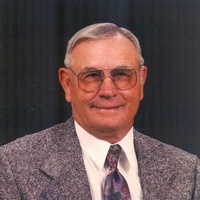 Longtime Meeker resident Delbert Lowell Hubbell, 90, passed away Monday, January 8, 2018 in Meeker.Visitation will be from 6pm to 8pm Tuesday at Walker Funeral Service. Funeral services will be 2:00 pm Wednesday, January 10, 2018 at Walker Funeral Service Chapel with Rev. Joe Jones officiating. Burial will follow at New Hope Cemetery in Meeker. Donations may be made in Delbert’s name to the First Christian Church of Meeker, or the Masonic Lodge of Meeker.Delbert L. Hubbell was born January 22, 1927 in Meeker, Oklahoma to Elwin and Nettie (Gallaway) Hubbell. He attended Thompson Elementary School and graduated from Meeker High School in 1944. He served in the United States Army Infantry in Germany during WWII. He married Joan (Armitage) on September 2, 1950. Mr. Hubbell was a 32nd Degree Mason and was a member of the Masonic Lodge in McAlester, Guthrie, and Meeker. He was named Honorary Member of the Meeker Chapter FFA in 1993, served on the Lincoln County Conservation District Board, and was a member of A.S.C.S. He was a member of First Christian Church in Meeker where he served as a Deacon. Delbert loved his family and his church and enjoyed hunting and fishing.He was preceded in death by his parents, 1 brother: Elvis Hubbell, and a niece: Lisa Graham.Survivors include Wife: Joan Hubbell of the home, 3 Daughters: Peggy Cullison and husband Randy of Shawnee, Karen Fowler and husband Eddie of Meeker, and Betty Wright and husband Garey of Meeker;  4 Grandchildren: Melissa Capps and husband Aaron, Darin Fowler, Melanie Young and husband Matt, and Heather Kaplan and husband Matt; Great-Grandchildren: Scout, Cole, and Cade Capps, Clayton Fowler, Rylee Young, and Daythan Lawson; Sister: Sue Graham and husband Paul of OKC, Brothers: Edsel Hubbell and wife Norma of Wichita, KS, and J.C. Hubbell of Meeker, And numerous nieces, nephews, other family members and friends.
To order memorial trees or send flowers to the family in memory of Delbert L. Hubbell, please visit our flower store.