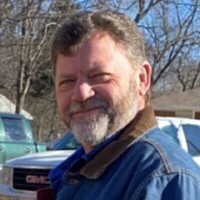 David Gene Bibb, Jr., resident of Shawnee, passed away on Monday, January 9, 2023. He was 49 years old. David was born on November 13, 1973 in Oklahoma City to his parents, David Gene Bibb, Sr. and Llewellyn Virginia Bibb. On October 16, 1992, David married Joni Janell Bibb and they were married for 30 years.

David’s passion was working on cars and he was a lifelong mechanic. He owned and operated David’s Automotive in Shawnee for over 15 years. Many organizations in the community trusted him with their vehicles, including OBU, the Shawnee Police Department, and CPN to name a few. David was a hard worker who would work from sun up to sun down if that’s what it took to get the job done. He gave more than he received and was extremely dependable; you could call him if you needed him, and he would be there, often with a solution to the problem.

The summertime with sunshine was David’s favorite time of year. He enjoyed taking out his boat, camping, and fishing. He loved cooking ribs and if you’ve never eaten any, you’ve never had a good one. David didn’t travel far without a margarita or a Busch. He may have been a bit stubborn and hard-headed at times, but he loved his family and friends deeply and enjoyed taking everyone out to eat, especially at one of his favorite spots, Cazadorez.

David was the best father and friend. He was loving, caring, and had a heart of gold. His smile would light up a room. You could often smell his cologne first and notice his cleanliness shortly after. Even though he was a mechanic, he never had greasy hands or dirty clothes.

David may not have attended church, but he always believed God would take care of him. His beliefs helped his daughter develop beliefs in God herself. David’s past included seven felonies. He worked hard in his life to better himself and move past those experiences. Recently, David was successful in having his entire record expunged.

A funeral ceremony to mourn David’s passing and remember the good times will be held on Monday, January 16, 2023, at 1:00 pm at the Walker Funeral Chapel. Following the ceremony, he will be laid to rest at Pleasant Valley Cemetery in Wheatland, OK. Casket bearers will be: Joseph Bibb, Bill Bibb, Tray Shepherd, Jason Almon, Tony Comerate, and Brooklyn Shepherd.

He may not have been here for a long time, but he was here for a good time and will be missed by those who shared in those good times.

To order memorial trees or send flowers to the family in memory of David Gene Bibb, Jr., please visit our flower store.