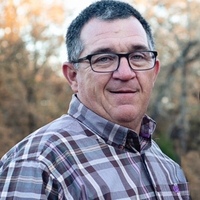 Craig Ashley Cooper was born in Columbus, Ohio on February 16, 1968 to Robert and Leslie Cooper. Craig grew up in Garland, Texas where he graduated from North Garland High School in 1987. He received a degree in Health and Human Performance from Oklahoma Baptist University. He came to Shawnee to run track, helping the team win a National Championship in 1990. Craig never left Shawnee, because he met the love of his life, Ronda Mimms, in the OBU cafeteria their freshman year. Soon after their first meeting Craig told a friend, “I’m gonna marry that girl.” Despite that assurance, it took him two years to work up the nerve to ask her out. Then, she stood him up four times, but finally his persistence, charm, and good looks won her over. Craig and Ronda were married on August 5, 1995. Craig Cooper was a public servant and a hero, and once said of his job, “I’m just an ordinary man doing extraordinary things for extraordinary people.” He began his career of public service as a paramedic with React Ambulance Service and fulfilled his lifelong dream of becoming a Firefighter after joining the Shawnee Fire Department in 2000. Lieutenant Craig Cooper proudly wore badge number 88 with the City of Shawnee until his retirement in 2017. Craig was a proud father to his boys—Lane, Cameron, and Riley. He took great pride in their achievements and watching them grow into fine young men. "Coop" as Craig was known to many of his friends was an avid hunter and fisherman. He shared his love of the great outdoors with his family. A perfect day for him was fishing with his boys. Sadly, and far too soon at the age of 53, Craig passed away from brain cancer on March 29, 2021. Craig was preceded in death by his mother, Leslie A. Cooper, and brothers Robert R. and Jeffrey S. Cooper. Craig is survived by his beloved wife Ronda and sons, Lane, Cameron, and Riley, all of Shawnee, Oklahoma. In addition, he is survived by his father Robert A. Cooper and his wife Bonnie of Sherman, Texas, as well as his sister Carolee Cooper of Woodbridge, Virginia. The Cooper family would like to express their gratitude to all the friends and relatives who have supported them throughout Craig’s illness. Your prayers, donations, cards, e-mails, and visits have sustained them during this difficult time. The family would also like to thank the doctors, nurses, and staff of the Stephenson Cancer Center in Oklahoma City and St Anthony’s Hospital in Shawnee, for their care during treatment. Finally, the Coopers would like to thank the staff and nurses of ComforCare and Heartland Hospice who provided excellent care to Craig at the end. In lieu of flowers, please consider honoring Craig by making a donation in his memory to: The American Brain Tumor Association, 8550 W. Bryn Mawr Ave #550, Chicago, IL 60631, https://give.abta.org/give. Services will be 2:00 P.M. Friday, April 2, 2021 at Immanuel Baptist Church under the direction of Walker Funeral Service.
To order memorial trees or send flowers to the family in memory of Craig Ashley Cooper, please visit our flower store.