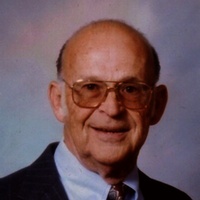 Clyde E. Zurmehly, Jr., 91 of Norman, OK died Wednesday, December 13, 2017 in a Norman hospital.Graveside services will be 10:00 a.m. Saturday, December 16, 2017 at Fairview Cemetery with Rev. Jonathan Clour officiating. Clyde was born May 10, 1926 in Lima, Ohio to Clyde Elwood & Cleta (Rehm) Zurmehly, Sr.  He graduated from Shawnee High School in 1944, and attended OBU & OU.  He was an all-around athlete, excelling in basketball, football, track and golf in high school, and also while at OBU & OU.  In addition to decades long service as clerk and postal inspector for the US Postal Service, he worked as an investigator for Holloway after he retired from the post office.   On June 12, 1947 he married Oleta Jean Hiser in Shawnee. 70 years of marriage resulted in a loving and close knit family, for whom he cared deeply.  He will be greatly missed by his family.  The family had C & N Sports Shop, and Clyde volunteered at the Norman Police Dept. and as Marshall for Trails Golf Course.  He was a life guard as a young man and taught his children and grandchildren to swim.  He was a member of Wesley United Methodist Church, and enjoyed fishing, golf, swinning, water skiing, home improvements and woodworking.He was preceded in death by her parents Clyde & Cleta Zurmehly, son Woody Zurmehly, a great grandchild Matthew McCall and a sister Helen Pritchett. He is survived by his wife: Jean Hiser Zurmehly of the home, 2 Daughters & their husbands: Cathy Zurmehly Boggs & Ronald, and Gina Zurmehly Thompson & Chuck; 5 Grandchildren, Amy Boggs McCall, Patrick R. Boggs, Emily Boggs Rupley, Bailey Thompson and Morgan Thompson; 6 Great-Grandchildren: Madison McCall, Christopher Boggs, Emma McCall, Ally Boggs, Camila Rupley & Penelope Rupley; and brother: Charles Zurmehly.
To order memorial trees or send flowers to the family in memory of Clyde E. Zurmehly, Jr., please visit our flower store.