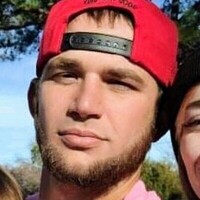 Chance French,29, of Earlsboro, Oklahoma passed away on February 1st, 2022 unexpectedly. He was born to Jeffrey French and Charlotte Shoults on September 6th, 1992 in Shawnee, Oklahoma.  In his younger years, he went to McLoud Elementary School but graduated from Earlsboro, Oklahoma in 2010.  Chance was a plumber by trade and was employed by Heartland Plumbing in Oklahoma City.  Chance was a kind soul with a big heart always helping others before himself. His greatest joy was spending time with his fiancé, Hannah Aldridge Mullins and her three children. Chance also liked to fish and hang out with his buddies if you could get him off the couch or if Hannah was away. Chance was a self-proclaimed Momma’s boy, his tattoo is there to prove it.  Chance made friends everywhere he went.

He is survived by his Mother and Step Father, Charlotte and Steve Shults of Earlsboro, Oklahoma; his fiancé Hannah Aldridge Mullins  and her three children Nehemiah, Anberlin, and Trustin; his eldest brother Zach French and wife Jamie French (Henderson) and  two sons Aiden and Hudson French; his second eldest brother Joshua French and wife Jessica French (Hall)  and their daughter Adelyn French; his paternal grandfather Leo French of Shawnee, Oklahoma; his aunt Paula Shults of Shawnee, Oklahoma; his aunt Louella Garza of Texas; his aunt Lorraine and uncle Paul Doan of Indiana; his uncle Sheldon and aunt Sherry Shoults of Texas; his aunt Gretchen Cole of Indiana; his uncle Bradley Shoults of Florida; his aunt Audrey Manuel of Texas; his uncle Walter Shoults of Texas;  and his cousins, Camaron Snyder, Cuyler Snyder, Dakota Price, Shelby Price, Trinity Fountain, Destiny Bedwell, Amanda Dickenson, Michelle Unruh, Ian Mayes, Olivia Mayes, their families  and MANY other cousins and great cousins. He is survived also by his family friends of Randy and Brenda Nease and Teddy Hammons; Hannah’s siblings Lauren, Ryan,and Paige Buzbee; his in-laws Jennifer Ruppel and Jeremy Schlarb of Tahlequah, Oklahoma. Chance had numerous other family and friends that will miss him very much.

Chance will be terribly missed and his presence will never be replaced.

The funeral service will be held privately at Walker Funeral Home in Shawnee, Oklahoma.

To order memorial trees or send flowers to the family in memory of Chance Dalton Joseph French, please visit our flower store.