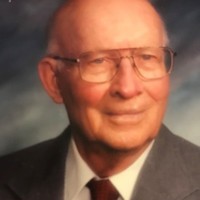 Cecil Eugene Nelon, 102, loved as a father, grandfather, and great grandfather, respected as a CPA and community volunteer, WWII Navy veteran, and skilled amateur athlete, passed away peacefully on January 1, 2020. He was born on August 17, 1917 near Morris, OK, the son of Thomas F. and Cora Belle Nelon. His dad worked in the oil fields of east central and southeast Oklahoma, so Cecil spent his early childhood years in the countryside near small towns such as Bald Hill, Haskell, Bowlegs, Kight, and Sasakwa. Cecil graduated from Sasakwa High School.In September 1936, Cecil left home and moved to Shawnee to attend Cheatham’s Business College. There he met Neata Madelyn Fox, who was taking some courses before she headed off to what was then Oklahoma A&M. They married on December 16, 1944 and remained married for nearly 68 years until her death in 2012.Cecil served in the U.S. Navy during World War II, spending virtually all of that time on the heavy cruiser USS Pensacola. He enlisted in October 1941. Because his orders after training in San Diego were delayed, he arrived for sea duty at Pearl Harbor on Christmas Eve, a couple of weeks after the Japanese attack on December 7, 1941. During his time on board, the USS Pensacola saw action at Bougainville, Midway, Guadalcanal, Solomon Islands, Tarawa, and the Marshall Islands, among numerous other engagements. The ship was twice hit by Japanese torpedoes. Cecil was a Chief Petty Officer, applying his business skills at what the Navy called a ship’s “store clerk.” In early 1944, Cecil declined an offer to go to officer training and make the Navy a career. He left the Navy in early 1945 after marrying Neata.Cecil and Neata had three children, Robert, now of Oklahoma City; James, now of Woolwich, Maine; and Kathryn, now of San Antonio, Texas. Neata and Cecil lived in Shawnee until they moved in 2001 to Oklahoma City, where they lived until their deaths.After his Navy service, Cecil returned to Shawnee, earned his certificate as a CPA in 1952, and established an accounting practice with Neata’s father, Guy Fox. Cecil practiced accounting with various partners through the years in Shawnee until he retired in 1982.Cecil was active in the First Presbyterian Church of Shawnee for many years, serving numerous terms as Elder. He was a long–time member of the Shawnee Kiwanis Club and the Elks Club in Shawnee. He served as President of Shawnee chapters of the Kiwanis Club, the YMCA, and Camp Fire Girls, and as treasurer of the Oklahoma Junior Chamber of Commerce.From the time he was playing in sandlots as a small boy, Cecil loved baseball. In early 1938, while studying at Cheatham’s and working at the Shawnee Milling Company, Cecil was spotted by a scout for the Philadelphia Phillies. Cecil signed a contract to play for the Tulsa Oilers, but his professional baseball career was short-lived. He was a right-handed first baseman; at training camp the player/manager wanted a left-handed first baseman (which the manager was himself), and Cecil never got a chance to show his skill. He still played baseball and softball on amateur and semi-pro teams for many years after World War II, and he was a respected little league coach who had a positive influence on many young boys in Shawnee.Cecil was an avid golfer, loved reading newspapers and books, and enjoyed watching sports of all kinds.Cecil was preceded in death by his parents; his wife, Neata; his brother Dale Nelon; and his sisters Gladys Farmer, Polly Patterson, Elena Tuttle, Joann Marquis, and their spouses. He is survived by one sister, Peggy Jackson and her husband, Clint; by his three children Robert D. Nelon and his wife Freddie A., James R. Nelon and his wife Edwina M., and Kathryn E. Loveland; grandchildren Gregory T. Nelon of Oklahoma City, Lindsay Nelon Stout and her husband Eric E. Stout of Plano, Texas, and Mackenzie Loveland Araguz of San Antonio, Texas; great–grandchildren Sebastian Araguz of San Antonio, Texas, Nelon and Madelyn Stout of Plano, Texas; and a number of nieces and nephews.A service to celebrate Cecil’s life will be held on Monday, January 6, 2020 at 1 pm at Covenant Presbyterian Church, 10100 Ridgeview Drive, Oklahoma City. Burial will follow at Resthaven Memorial Park in Shawnee. In lieu of flowers, donations can be made in honor of Neata Madelyn Fox Nelon to the Alzheimer’s Association Oklahoma Chapter, 6601 Broadway Extension, Suite 120, Oklahoma City, OK 73116.Services are under direction of Walker Funeral Service, Shawnee, OK.
To order memorial trees or send flowers to the family in memory of Cecil Eugene Nelon, please visit our flower store.