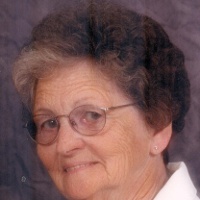 Catherina V “Cathy” Chapman, 86, of Harrah, died on Sunday, June 30 in Midwest City. Cathy, the daughter of Charlie and Tressie (Smith) Jones, was born on May 2, 1933 in Westville, Oklahoma. On May 19, 1980, she married Lonnie Chapman in Gainesville, Texas. Cathy worked at several grocery stores as a cashier. She loved shopping; collecting Coca Cola memorabilia; and hosting friends for coffee at her house, many times these friends would bring a coffee mug for Cathy which lead to her having quite a collection of coffee mugs. Cathy's favorite thing in life was her rather large family, she loved spending time with them. Cathy was preceded in death by her parents and by three brothers. She is survived by her husband, Lonnie; son, Mike Conlin; daughter and son-in-law, Carol and Woody Hudson; several grandchildren; brothers, Bobby and Sherden; sisters, Oleta and Ruby; and numerous nieces, nephews, and other family and friends. A graveside service for Cathy will be Wednesday, July 3 at 10:00 AM at Memory Lane Cemetery in Harrah, with Larry Stone officiating. Services are under the direction of Walker Funeral Service in Shawnee.
To order memorial trees or send flowers to the family in memory of Catherine V. Chapman, please visit our flower store.