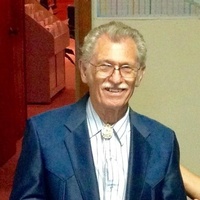 Paden resident C. Elden McNabb, 84, passed away quietly at his home on Tuesday, December 11, 2018 surrounded by family and precious saints after a battle with Alzheimer’s. Viewing will begin Friday at The People of Truth Church in Paden from noon to 4pm then again from 6pm to 8pm.Services will be 10:00 A.M. Saturday at The People of Truth Church in Paden with burial to follow at the Paden Cemetery. Clarence Elden McNabb was born December 11, 1934 in Drumright, Oklahoma to Virgil and Edith (Riley) McNabb. Elden spent much of his childhood in California. He joined the United States Air Force in 1954 and served for four years. He was known for his great love of the Lord, and talking about the things of God was his favorite subject. He started preaching at age 10. He pastored for different church organizations in many states over the years, including the Church of God of Prophecy, The Church of God at Jerusalem Acres, TN, and finally pastoring as Chief Bishop of The People of Truth in Massachusetts, and most recently in Paden, OK. He had also ministered in Canada, Mexico, Scotland, and India. His favorite song was “I wanna go there when He calls my number. I wanna go there when He calls my name.” As such, he was a faithful servant of God, and though none of us are worthy of the least of His mercies, yet God has a special place for him in His Kingdom. Elden was also an accomplished carpenter, pilot, mason, and overall jack-of-all-trades. He leaves behind Enzenia, his wife of almost 64 years, who has been a constant and loving companion, by his side throughout the years;4 Sons and their wives, Joel and Angel of Paden, OK,Keith and Ann of Suffield, CT,Richard and Debra of Springfield, MA,David and Luda of Paden, OK,13 Grandchildren, and 13 Great-Grandchildren. Additionally, there are many “children in the Lord” that he fathered through his ministry by the Spirit. He will be greatly missed, but he leaves a legacy that will continue well past his life on the earth. Farewell, and “Well done, thou good and faithful servant.”
To order memorial trees or send flowers to the family in memory of C. Elden McNabb, please visit our flower store.