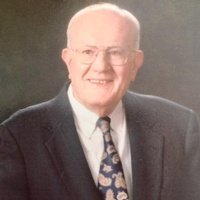 Shawnee resident Byron Dale Cates, 84, died Thursday, October 19, 2017 in Shawnee. Memorial services will be 2:00 P.M. Friday, October 27, 2017 at First Baptist Church in Shawnee. In lieu of flowers, memorial contributions can be made to the Dale and Jonetta Cates Scholarship Fund at Oklahoma Baptist University.  Byron Dale Cates was born in Olton, Texas on December 10, 1932 to Clyde and Naomi Cates.  He moved to Coalgate, OK at the age of 5.  He graduated from Coalgate High School in 1951 and then from Oklahoma A&M in 1955.  In 1955 he married Jonetta (Hart) from Henryetta.   He served in the U.S. Army for 2 years at Ft. Sill in Lawton, OK.  He earned his C.P.C.U. over the next 5 years. He worked for Royal Globe Insurance Co. for 13 years in Nashville, Memphis, and Chattanooga, TN.  He was in an Insurance Partnership in Pryor for 5 years.  In 1975 he purchased an Insurance Agency in Wetumka.   Due to health issues he sold the agency 10 years later. He moved to Shawnee and sold Church Insurance with Romberg Agency until he retired at the age of 80.  Dale loved people and enjoyed making everyone laugh.  He’s been an avid O.B.U. supporter since 1975. He had a very close relationship with God and tried to serve Him by teaching Sunday School Classes, being a dedicated Deacon for over 60 years, and serving on many committees at all the Baptist churches where he lived.  Living relatives include his Wife: Jonetta, Son: Byron and wife Deidra, Daughter: Carlise and husband Tim Nye, Grandchildren: April and Shayne Waldon, Kyle and Ashley Cates, Christy and Chris Wilkes, Keaton and Kayla Nye, and 9 Great-Grandchildren.
To order memorial trees or send flowers to the family in memory of Byron Dale Cates, please visit our flower store.