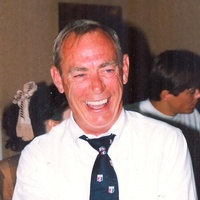 Burton Montgomery Barrett, Born - June 16, 1936, Died - July 6, 2018 He was the eldest son of Uriel Laverne and Donna Delora Barrett, Monty was brother to Barbara Jo and Richard Allen. All four of whom precede him in death. Monty's dad went to India for the US Army Corps of Engineers towards the close of the Second World War. Leaving Monty as so many others of his generation, as the "man of the house" while his dad did his part in the greatest generation. At the age of eight Monty went to work every morning at 6:00am for a dairy in his home town of Shawnee, Okla. and worked after school in the family's victory garden raising enough vegetables to feed the family and share with others. He often told stories about gas rationing, aluminum and rubber drives and the sacrifices made during that time by so many. Naturally intelligent, self-motivated and gifted with innate mechanical abilities, Monty was soon tuning cars and repairing farm equipment around Shawnee and Dale. After attending Oklahoma Baptist and Oklahoma State Universities, he worked for his Dad's company servicing and repairing coin operated vending machines and joined one of the first motorcycle associations to form in Oklahoma, the Shawnee Creepers, with his best friend Bill Cleek. Monty bought his first motorcycle, a 74 inch Harley Davidson, as a basket case and rebuilt it at home at the age of 19. Originally an "outlaw" organization, the Creepers eventually became AMA accredited and ran sanctioned races around the state. Monty advanced through the competitive brackets and by the mid 1960's was a nationally ranked Expert class rider. National number 85M. He raced at prestigious events such as Springfield and Daytona. In 1969 Monty traded the bikes for airplanes. He acquired his private pilot's license in a Grumman Yankee at Jones Airport in Jenks Oklahoma and in typical fashion, rapidly acquired an instrument rating, multi engine and certified flight instructor's ticket. Monty took his first flying job with Carl Lowrance, one of the first innovators of sonar for sport fishermen. Monty designed and patented several innovations for Lowrance. When not designing or testing fish locators, Monty flew Carl and other Lowrance executives in the company's Cessna 180. He eventually flew for Dalco Petroleum, Cotton Petroleum and Quarles Drilling Corporation in a variety of turbo props and jets. He shuttled business luminaries, entertainment personalities such as Bob Hope and Gene Hackman and even Arabian royal family members around the world. True to form, Monty built his own airplane, built an engine for it, and flew his first aerobatic airshow on his fiftieth birthday. Monty and wife Betty started BPA in 1984. They built it into perhaps the world's pre-eminent engine overhaul facility for experimental, high performance aircraft engines. Monty served on the United States Aerobatic team World Aerobatic competitions in Oklahoma City, France and Switzerland as Chief Mechanic and was honored by the Oklahoma State Legislature as the Oklahoma Aviator of the year in 1993. One of his proudest moments was when his dear friend Patty Wagstaff was inducted into the Smithsonian Museum on permanent display, with his engine included. Monty was also an accomplished musician. Mastering the trombone, the guitar, the piano and the fiddle. He was an avid outdoors man too. Camping, hunting, and fishing are some of the family's favorite memories of their youth. Many extended family members would offer to pay Monty to set up camp in their gardens; rain was always guaranteed when the Barrett's pitched a tent. Not content with a simple hobby, Monty became a master gunsmith, reloader and fishing rod winder. He was a founding member of the Okie BASS Club. As accomplished as he was, Monty's proudest achievement and his primary focus was always his family. He married Betty Jane Kinnamon on July 13, 1958 at the Hilltop Baptist Church in their home town, Shawnee Oklahoma and enjoyed sixty years of marriage. They remained feisty, flirty, faithful and fun loving to one another throughout it all. Monty and Betty instilled respect for the honor of work, a love of music, stewardship of the outdoors, creativity and a legacy of family values centered on knowledge, determination and dignity into their family. Their eldest son, Monty Lynn resides in Waco, Texas working in general aviation. Son Thomas Allen and wife Rita reside in Preston, OK. Youngest daughter Rhonda Barrett-Bewley and her partner, Lonnie Stokes, reside in Broken Arrow. Allen and Rhonda continue to operate what is now Barrett Precision Engines. Eldest daughter, Dana Elizabeth, resides with her husband Steve Jones in Tulsa. Grandsons Stuart, Kenny, John-Robert and granddaughters Kasey and Clara Joy survive him; as well as great grandsons Jackson Montgomery and Vincentius Montgomery. All were present at Monty's 82 birthday to honor, admire and love the man who encouraged, challenged, corrected and cheered them all onto their own accomplishments. There will be a family visitation Tuesday evening from 5-7 p.m. at Walker Funeral Service. Funeral services will be 11:00 a.m. Wednesday, July 11 at Walker Funeral Chapel with Rev. Larry Sparks officiating. Burial will follow in Dale Cemetery.
To order memorial trees or send flowers to the family in memory of Burton Montgomery Barrett, please visit our flower store.