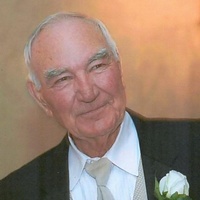 Bill J. Conway, of Shawnee, Oklahoma passed away on August 15, 2018 in Oklahoma City. Bill was born in Ardmore, Oklahoma June 20, 1929, the son of Oliver Frank and Ollie Mary (Nix) Conway. He graduated from Plainview High School in 1948, served in the U.S. Navy during the Korean War aboard the U.S.S. Piedmont from 1948 to 1952. His 34-year career in the Federal Aviation Administration was in flight inspection, electronics, quality assurance, and procurement of electronic navigational equipment. During this time attended college at Oklahoma A&M and Oklahoma Central University. In 1951 he married and moved to Oklahoma City where his sons Bryan J. Conway, Brent Arden Conway, and daughter Marla K (Conway) Bright were born. In 1978 he married Marilyn (Parker) of Corinna, Maine and they made their home in Hopkinton, Mass until 1985 when he was transferred to Oklahoma City. In 1989 they purchased a farm in Prague, OK where they lived happily fulfilling their dream of raising registered Black Angus cattle. Bill was an avid golfer and made some lasting friends in the Elk's Senior Golf Association. He was a devoted Mason belonging to the Prague Lodge No. 209. He was a dedicated community volunteer. He served as President of the Hartshorn, OK Chamber of Commerce, later as President of the Prague Chamber of Commerce where he was fundamental to the Prague Chamber acquiring its own building. Bill also served as President of the Prague Golf Club, was a member of the Prague Lion's Club, and served on the Hopkinton, Mass. Water Commission. Bill was a member of St. Paul's United Methodist Church, Shawnee, OK. Bill is survived by his wife Marilyn Conway of Shawnee, son Bryan Conway of LaMesa, California, son Brent Conway of Kansas, daughter Marla Bright of Chanute, KS, five grandchildren, 5 great grandchildren, sisters Merti McKee and husband Shannon of Dallas, IX, Sharion Cooper and husband Ray of Yukon, OK, Peggy Luckett & husband Jim of Guthrie, OK Funeral service will be held Saturday, August 18th at 2:00 p.m., St. Paul's United Methodist Church in Shawnee, OK. Reception at church immediately following service. Interment will be in Corinna, Maine.
To order memorial trees or send flowers to the family in memory of Bill J. Conway, please visit our flower store.