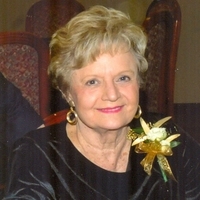 Bevlyn, loving wife and mother, passed on to be with our Lord on her 76th birthday, Saturday, January 18. She was born in Tulsa, OK to Jack and June Bradfield on January 18, 1944. Her family moved to Shreveport, LA when she was about 5 years old, and then to Shawnee when she was in the 5th grade. She attended Will Rogers Grade School, Shawnee Jr. High School and graduated from Shawnee High School in 1962. While in high school she was president of Tri-Hi-Y, yearbook co-editor, yearbook queen, active in Pep Club, Horizon Club and Student Council. On June 1, 1961, the summer between her Jr and Sr year at Shawnee High School, she met the love of her life, Leonard Taron, after he picked her from a picture in the SHS yearbook for a blind date, and neither one ever looked back. After graduating from SHS she attended OU where she was a member of Kappa Kappa Gamma social sorority, even though Leonard was a graduate of OSU. On July 11, 1964 Bevlyn and Leonard were married at St. Benedict Catholic Church. They continued to live in Norman the year after their marriage so she could continue her education. In the summer of 1965 they moved back to Shawnee where Leonard went into business with Bevlyn’s father at Sooner Supply. When back in Shawnee, she became active in Campfire, where she was leader for at least one of her nieces. She was active in Junior Service League and was a sustaining member. She was a Jaycee Jane, where she became involved in the Miss Shawnee Pageant from 1968 until 1997, and was the executive director for a number of years. She took many young ladies to the Miss Oklahoma Pageant and some on the Miss America Pageant, serving as chaperone on numerous occasions. She was an active member of P.E.O., where she served as treasurer, and friends of the Mabee-Gereer Museum of Art, and was one of the charter members of the volunteers at MGMOA. Bevlyn is survived by her husband Leonard of 55 ½ years, daughter Andrea Suzanne, son Michael Bradfield “Brad”, her mother June, sister Mary Beth Franklin, cousins Larry Bradfield and wife Jimi, Jenna Rice Thomas and husband Rick, Joseph E. Taron, Mary Taron Williamson and husband Richard, Chris Taron, wife of deceased James Taron, Katherine Taron Mullin and husband Randy, Joan Taron Jackson and husband Larry, Timothy Taron and wife Carolyn, and numerous nieces, nephews and many, many loved ones! She was preceded in death by her father, Jack, father and mother-in-law Pierre & Lelia Taron, 3 brothers-in-law and spouses, 3 sisters-in-law and spouses, numerous nieces and nephews, aunts and uncles. Special thank you to Oklahoma Palliative & Hospice Care staff, especially nurse Lisa Combs and aide Jennifer Young. A wake service will be held Thursday, January 23 at 7:00 p.m. at St. Benedict Catholic Church. Mass of Christian Burial will be 10:00 a.m. Friday, January 24 at St. Benedict Catholic Church with burial following in Calvary Cemetery. Pallbearers will be Bevlyn’s nephews, Denis Taron, Jr., Jacob Taron, Rowdy Joe Taron, Kraig Taron, Stuart Taron and Michael Stith. In lieu of flowers, the family lists the following as appropriate for memorials:St. Benedict Catholic Church: 634 Kickapoo Ave, Shawnee, OK 74801 or Mabee-Gereer Museum of Art: 1900 W MacArthur, Shawnee, OK 74804
To order memorial trees or send flowers to the family in memory of Bevlyn June Taron, please visit our flower store.