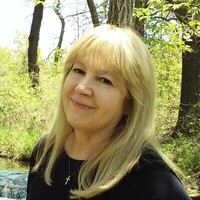 On July 18, 2020, the world became a little less bright. Beverly Freeman left this world to be with her Lord and Savior, Jesus Christ, after losing her battle with cancer. Beverly Kay Freeman, 63, of Shawnee was born on July 21, 1956 to Donald and Leola Gaston at Vance Air Force Base in Enid, Oklahoma. She is preceded in death by her parents, and brother Terry Gaston. She is survived by her husband and love of her life, Mike of the home, brother and sister-in-law Jerry and Beverly Gaston of Coffeyville Kansas, and numerous aunts, uncles, cousins, nieces and nephews. After living in many different cities and states while her father was in the Air Force, she ended up in Prairie Grove, Arkansas where she graduated from high school. After graduating, she became somewhat nomadic and found employment in Fayetteville and Fort Smith, Arkansas before moving to Kansas, where her parents had relocated. After a few months she moved to Tulsa where she attended and graduated from Draughon’s School of Business. She then accepted a position at Target Stores in Tulsa, where she met Mike. They married two years later, started their life in Shawnee and were married for 38 years. Beverly was employed as a bookkeeper, payroll clerk, and general clerical by the Dr. Pepper Bottling Co, Shawnee Bottling Company, and Sonic Computer Service where she retired in 2015. She was as sweet and kind of person as you will ever have the chance of meeting. She was a really good listener, enjoyed “people watching”, and would much rather let others do the talking and take center stage. She enjoyed shopping, going on road trips to casinos, watching old black and white movies and sitcoms, and taking care of Mike. When Jesus proclaimed in Matthew 5:5: “Blessed are the meek, for they shall inherit the earth”, Beverly was surely one of the blessed He was referring to, for there has never been a more meek person than her. She will be greatly missed on this earth, but will make God an excellent Angel in Heaven. Services will be Wednesday, July 22 at 10:00 a.m. at Walker Funeral Service. Interment will follow at Resthaven Memorial Park in Shawnee.
To order memorial trees or send flowers to the family in memory of Beverly Kay Freeman, please visit our flower store.