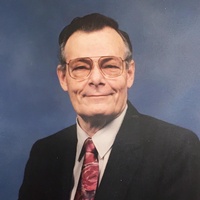 Arlen Dodson Hill, 86, of Shawnee, Oklahoma passed away peacefully at his home on September 28th, 2017. He was born to Col. Walter T. Berg and Iva Dian Dodson Berg on October 27, 1930. He was the eldest of three sons. His early years were spent in Miami, Florida with his mother. He then went to live in Farmington, New Mexico with his father, step mother, Winnifred Berg, and brothers, Edward and Steven Berg. Attending school at Oklahoma A&M, he earned a Doctorate of Veterinary Medicine. During his years at Oklahoma A&M, he met the love of his life, Mary Ann Hedberg. They married December 20th, 1953 at University United Methodist Church in Tulsa, Oklahoma.  They had three children: Mary Lynn, Robert Walter, and Susan Kay.  He practiced veterinary medicine for many years at Acadia Veterinary Hospital in Tulsa, Oklahoma. He met the Lord at a Lay Witness Mission at Will Rogers Methodist Church in 1970.  He and Mary Ann became leaders in the Church and were spiritual mentors to many. After Mary Ann lost her battle to cancer in 1999, Arlen moved to Alaska. He remarried Lois French and lived in Alaska for 10 years. Following Lois’ short battle with cancer, Arlen moved to Shawnee, Oklahoma to live with his daughter, Susan and her family for the remainder of his years. Arlen’s passions included sharing Christ’s love with others, teaching God’s Word, reading, going to movies, his four legged friends, watching football, and spending time with his family.  He spent many hours on his boat “Slipaway” and loved teaching his children to sail.  He was preceded in death by his parents, Walter T. Berg, Winnifred Berg, and Dian Hill, both of his wives, Mary Ann Hill and Lois French Hill, and his brother, Edward Berg, MD. He is survived by his brother, Steven Berg; his children: Mary Mihelich Ventonis, PhD, Robert Hill, and Susan McLaughlin; 10 Grandchildren: Matt Mihelich, Andrew Mihelich, Faith Arp, Jason Murphy, Brian Murphy, Laura Hill, Jordan McLaughlin, Katie Cannon, Bethanie Lied, and Abby McLaughlin; and 11 Great-Grandchildren: Lane and Audrey Mihelich, Elizabeth Arp, Violet Murphy, Andrew Murphy, Lottie and Ruby McLaughlin, Carson and Cole Cannon, and Tatum and Collins Lied. In lieu of flowers, donations may be made to Will Rogers Methodist Church, c/o the Will Rogers Memorial Fund, 1138 S Yale Avenue, Tulsa, OK 74112. Services will be 11:00 a.m. Friday, October 6 at Will Rogers United Methodist Church, Tulsa. Burial will follow in Memorial Park, Tulsa, under the direction of Walker Funeral Service, Shawnee.
To order memorial trees or send flowers to the family in memory of Arlen Dodson Hill, please visit our flower store.