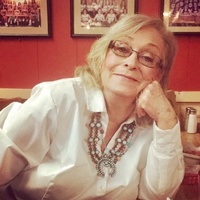 Anita Louise Trout, age 69, passed away peacefully into the presence of the Heavenly Father on Wednesday, February 6, 2019, at home in Shawnee, Oklahoma. She was born September 11, 1949, in Shawnee, to Lester and Norma (Bradford) Gwin. She was a 1967 graduate of Taylor High School in Taylor, Michigan, where she met the love of her life, Dennis Trout. She married Dennis on January 10, 1970, in Michigan. Together, they had two daughters, Holly and Brandy. After retiring from nursing, she worked at Liberty Academy, where she was a wonderful teacher of many subjects, ranging from Drama to Anatomy to Honors English. She was also a gifted actress who was very involved with Shawnee Little Theatre, and a member of Grace Church. Anita had an amazing ability to reach people in a deep and positive way. She is survived by her husband, Dennis; daughter and son-in-law Holly and Jack Thompson; daughter and son-in-law Brandy and Kevan Bond; grandchildren Sarah, Jake, Nate, Kate, and Jett; brother-in-law Marcel Didier; niece Chris Wykowski and her husband Jim; and nephew Bob Van Orden and his wife Andrea, and their daughter Kristen Walnofer. Anita was preceded in death by her parents, and her sister Joy Didier. Family, friends, and others whose lives Anita touched are invited to a memorial service to be held on Saturday, February 9, 2019 at 2pm at Walker Funeral Service, 201 E 45th St, Shawnee, OK, with pastor Scott Hendry officiating.
To order memorial trees or send flowers to the family in memory of Anita Louise Trout, please visit our flower store.