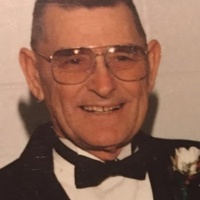 Shawnee resident Alfred Bryce, 85, passed away Tuesday, July 3, 2018 at a local hospital.The family will be at Walker Funeral Service to receive friends on Friday from 5pm to 7pm. Services will 2:00pm Saturday, July 7, 2018 at Liberty Baptist Church with Phil Thompson and Mike Massey officiating. Burial will follow at Resthaven Memorial Park. Alfred was born February 3, 1933 in Shawnee, Oklahoma to Sherman Wesley Bryce and Goldie Mae (Lawson) Bryce. He graduated from Bethel High School in 1951. He married Adriane (Hackett) in 1958. Mr. Bryce served in the United States Army during the Korean Conflict and received the National Defense Service Medal, Korean Service Medal, United Nations Service Medal, and Good Conduct Medal. He worked most of his life a mason bricklayer. He was a member of Liberty Baptist Church, the Masonic Lodge #107, and the V.F.W. He enjoyed fishing, drinking coffee and walking in the mall, and being ornery. He was preceded in death by his parents, his wife, a son: Brett Bryce, 8 brothers, and 1 sister.Survivors include a Daughter: Rhonda Gardner and husband Randy of Meeker,4 Grandchildren: Dillon McCabe and wife Cassidy of Shawnee,Danielle Gardner of Meeker,Wesley Bryce of Bethel,Chris Bryce and Brittany of Shawnee,2 Great-Grandchildren: Thomas and Avery Bryce of Shawnee,2 Sisters: Virginia Hopkins of Bethel,Zelma Cox of Ft. Smith, AR,1 Brother: Bob Bryce of N.C.,And numerous nieces, nephews, other family members and friends.
To order memorial trees or send flowers to the family in memory of Alfred Henry Bryce, please visit our flower store.